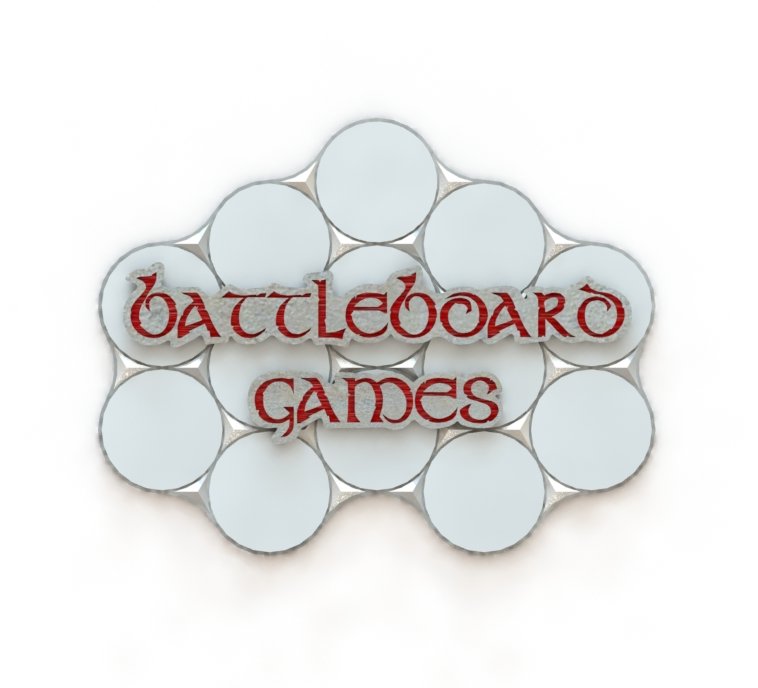 Revolutionize your tabletop gaming experience with the groundbreaking new dungeon-building system that snaps to a pegboard grid!

The What, the Why, and the How

So I’ve loved these games for as long as I can remember. The dice, the adventures, the minis…all of it. OK…so, not all of it. I am one of those Dungeon Masters who absolutely loves seeing and using miniature terrain in my games (the Dungeon!), but I have always struggled with one aspect or another. Some terrain options are beautiful and realistic, but weigh (AND COST) a ton. Sometimes I want my dungeon to be a thing on a wall or easel, more as a visual aid to understanding it’s topography than for combat encounters. I have, on many occasions, just begrudgingly drawn the dang thing on a large grid and just accepted the loss of the visual detail in trade for ease of use and transport.

When I would use physical miniatures and walls, I also ran into several other frustrating things that you are probably all too familiar with, like keeping my walls straight, or keeping Frank from knocking them over every time it was his turn at initiative. These are the struggles that many of us feel every weekend.

My love of traps, castles, and dungeons led me into a career designing mechanisms for a living. I am lucky enough to get to work using the latest technologies in Computer Aided Design and Additive Manufacturing (3D Printers!), and have spent the last decade signing my name to a number of patents in technologies way more advanced than kobold traps and dwarven secret doors (but not nearly as fun). This path allowed me to learn a great deal of things about design, manufacturing, and marketing, and as such, given me the chance to learn what I needed to solve my biggest dungeoneering quandary; how do I make an easy to manage dungeon system that Frank won’t knock over every time it’s his turn?

The new GRIDSCAPE™ modular terrain system has design features that allow each piece to snap onto common pegboard (you know, the thing on the wall in your garage). Where most dungeon terrain options only detail thin walls, Gridscape™ pieces fill in all of the solid space of a dungeon, making it all the easier to understand the layout of your dungeon. But this is only the most obvious advantage of Gridscape™! Just check out a few other features that makes Gridscape™ stand out:

LIGHTWEIGHT – Most dungeon terrain options are cast from resin, which makes them thick and heavy. Gridscape™ are molded from common ABS plastic (think video game controllers), meaning an entire dungeon would weigh a fraction of that of many others on the market (fun fact: FIFTY of our largest blocks weigh less than your player’s handbook). So, lugging your entire collection over to Oz’s house on game night won’t throw out your back!

SOLID HOLD – The patent-pending peg features in each Gridscape™ piece snap onto any standard pegboard. This is the single best part of Gridscape™ terrain! Use the industrial (9/32″ holes) pegboard for fast scene changes when you want a loose fit, or domestic (7/32″ holes) for a tighter fit.

FAST SCENE CHANGES – If you need to move blocks for a scene change, it is faster than any other system because you spend only a fraction of the time positioning, especially when using industrial grade pegboard (9/32″ holes).

STACKABLE – Features on the top of the blocks mimic the hole patterns of the pegboard below to allow you to loosely stack pieces for a more three-dimensional game. This also makes storage and transport way easier than the heavy fancy stuff.

INEXPENSIVE– Though we can’t compete with the old marker and paper standby, Gridscape™ blocks are cheaper than most other systems. Because they are made in a mold, most components cost about a dollar, and our 3dPrinted parts range from $1-5!

PUT THEM ON A WALL – If you are using the pegboard with 7/32″ holes (lower grade, but cheaper than the industrial stuff), Gridscape™ pieces will easily stay attached so the DM can show the map on an easel or wall. Just keep in mind that your figurines still have to follow Newton’s law of gravity.

MOBILE MAPS – Because Gridscape™ pieces hold their position so well, you can move your pegboard base around as you need to. How nice would it be to pick your entire dungeon up and rotate it so you can show Nate that his character couldn’t possibly see the assassin around that corner over there?

REALLY-REALLY MOBILE MAPS – Not trying to be redundant here, but here is another take on the whole, “mobile maps” concept: As your party moves through the dungeon, you tend to leave the last section behind, right? With Gridscape™ terrain, you can simply move the dungeon out of the way (i.e. pick up the peg board) and move more sections in as you need it. If the DM thinks the party might be about to turn around and come right back, he/she can simply move the entire section out of the way, only to put it back on the table when the party happens back that direction.

NEW DESIGNS IN THE WORKS – Though last year’s Kickstarter only unlocked the 1×2 and 2×2 blocks, we are hoping to have additional molds for the stairs, doors, and many other in the near future. Meanwhile, we have a lot of models in 3dPrinted format! 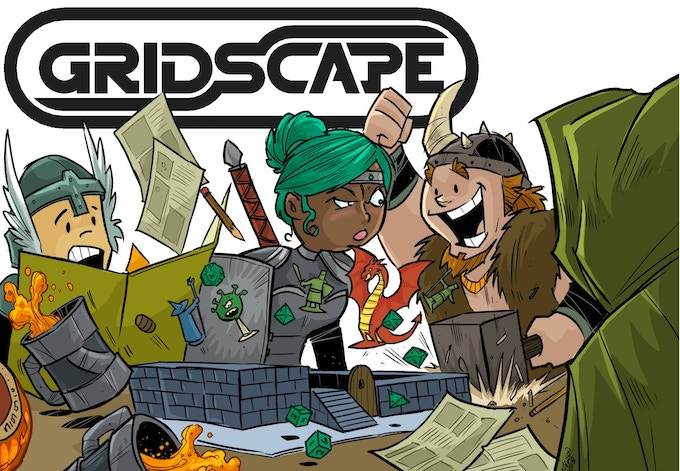 OK, so there I was sitting at a table in GenCon a couple years ago, with an idea in my head and uncertainty in my heart. The table I sat at had a great Dungeon Master named Don, who had a sweet setup with gorgeous dungeon pieces that he purchased from a vendor who also had a booth at the same convention (hint: dwarves). The pieces were beautiful. How could I ever compete with those? Dammit Don, I’m an engineer, not at artist.

That’s when I noticed a few things. Every time the scene changed, Don would have to break down his heavy setup and carefully prepare the next scene, while his players were wandering around, talking amongst themselves, or on their cell phones. They were losing interest.

At one point, we had a battle in a tavern, and Don used the same dungeon set for the scene, and I noted that he apologized that he had to use the dungeon pieces because he couldn’t bring all of his stuff with him to the table. Everyone agreed that this didn’t matter because they were all great at using their imaginations anyway. So, players were more interested in the story than the specifics on the table.

Don ran into other practical problems during the night’s adventures as well. Though he had taken a lot of time to make part of the tavern scene a multi-level setup, because part of the fight took place upstairs, he got frustrated at several points when the pieces were bumped and knocked about during the fight scenes. The terrain lost every round of initiative. At a certain point, he just pulled the upper level pieces and set them up as a separate “side scene.” Though a little confusing, everyone went with it.

After the game, I asked him about his terrain. He proudly said that he had over a thousand dollars’ worth of terrain (most of it was at home). He said the biggest thing he disliked about the terrain was the weight. Apparently, Don’s games weren’t always at his house, so when he plays at his buddy’s house, he only takes a box of about 40 basic pieces with him and relies on everyone’s imaginations to do the brunt of the work, rather than having the perfect setup every time. 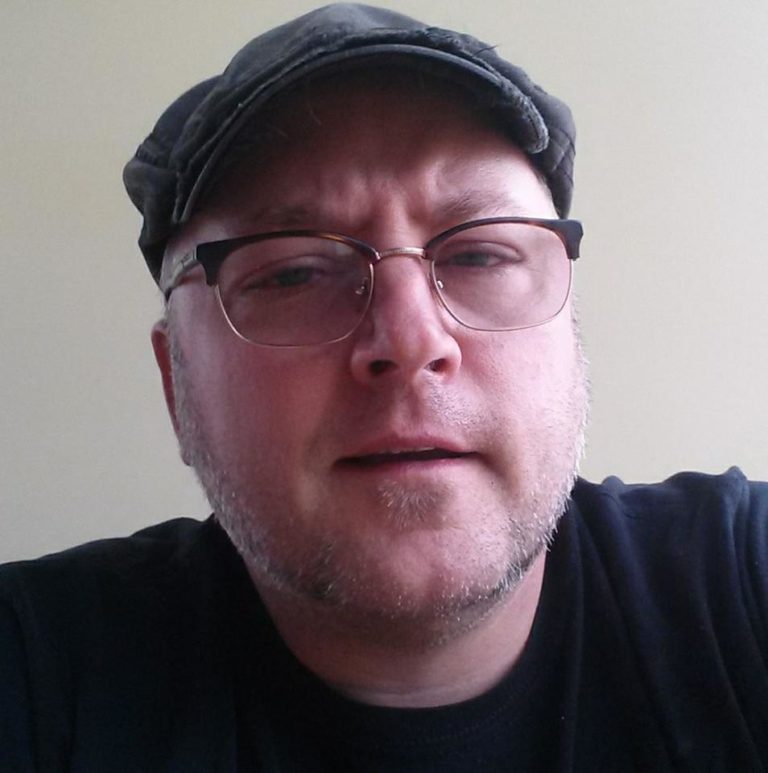